For some odd reason, the Rockefeller Archaeological museum is NOT on the list of must-see museums in Israel.

And it definitely should be.

Why you should visit the Rockefeller Archaeological museum


Granted, it does not have the amazing constantly updated art exhibitions of the Tel Aviv museum of art. Or world renown archaeological items such as the Dead Sea scrolls. Those are preserved in a special climate-controlled chamber at the Shrine of the book museum.

There are also no interactive displays that will take you on a 'back-in-time' journey through Israel's rich history. Or a museum shop selling T-shirts decorated with prints of ancient graffiti or posters of the old kings and rulers of the past.

There is just a cool old building filled with cool old stuff.

An old-school historian's kind of museum. The type of place where Indiana Jones would feel at home.

There might not be any interactive displays to the past but actually the entire building is like a time capsule. Just step through the beautiful carved doors and you will find yourself in a different time-space continuum.

The entire Rockefeller archaeological museum feels as though it was frozen in time for the last 50 years. It even smells old-fashioned. Maybe it is the floor polish? Or the stuff that is used to keep the display cases so pristine?

Have a look at this translation of some dead guy's tombstone. The content is quite fascinating by itself but did you notice the font and the paper that was used? Don't you agree that it looks as though someone typed it out on parchment paper on a REAL typewriter? Like fifty years ago?


Who dreamed the Rockefeller Archaeological museum into existence?

All of the antiquities that the Brits managed to dig up were housed in some obscure old building somewhere. But then in 1925 James Henry Breasted, founder and director of the University of Chicago's Oriental Institute came for a visit and he was like:

"Dudes, you need a proper museum for all these cool stuff."

And Lord Plumer (the guy running the show then in British Palestine) was like:
"You CAN do it!"

And he talked to John D. Rockefeller, Jr. and was like: "So the pommies in Palestine don't want you to build a museum in Cairo but you are allowed to build one in Israel."

And Rockefeller was like "Groovy" or whatever an American would say in the 1920's and donated two million dollars.

They started building in 1930 but then had to stop for a while because they managed to dig up some ancient graves..obviously. The museum was finally completed in 1938 and officially named the Palestine Archaeological Museum.

In 1948, with the outbreak of the Israeli War of Independence, the museum was closed but opened again 20 days later.

An international trustee (aka group of people who like old stuff) was created to run the museum. Remember that those days Jerusalem was divided into east and west. For a while the country Jordan, who annexed the West Bank was in charge of the museum for a couple of years.

After the Six Day War, Jerusalem was reunited and the museum was renamed as the Rockefeller Archaeological museum.

Who designed the Rockefeller Archaeological museum?

The architect of the museum was Austen Harrison from Britain.  He was named after the writer Jane Austen - an ancestor of his.

An interesting fact about Austen Harrison was that he wanted to resign from the military during the First World War. The senseless killing got to him and he did not want to be a part of it anymore. It would not however look good if a career officer from an established family just "left" the war. Eventually a compromise was reached and he spent the rest of the war as a stretcher bearer. 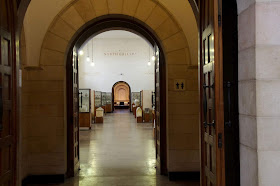 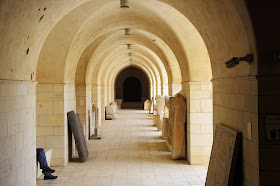 After the war Austen Harrison studied architecture and eventually found himself in Israel as Chief Architect in the Department of Public Works in the civil administration of British Palestine.


More about the artifacts INSIDE the museum

There are many treasures in the Rockefeller museum and part of the fun (I believe) is wandering through the halls and 'discovering' them for yourself.

Israel has a rich history and you will be able to find anything from a skull with a square hole to ancient jewelry, fertility figurines, ceramics and even old wooden panels from the Al Aqsa mosque.

Most of the antiquities in this museum where dug up during the British Mandate period (1919 - 1948). They are arranged in chronological order from prehistoric times to the Ottoman period.

There are no descriptions next to the items in the display cases but each are numbered carefully. If you would like to read more about the artifacts, just hunt down its corresponding number on the pages kept in the special slots against the wall.


What you shouldn't miss

The entire building is amazing. Just wandering through the halls and soaking in the atmosphere is already winning but here are some unique highlights:

Jerusalem has been decorated from like forever by amazing colorful ceramics. The ceramics display in the museum is not only beautiful (and very colorful) but also extremely informative about this ancient art medium.

Right in the center of the building there is this beautiful courtyard decorated with ancient sarcophagi. It is a great place to rest your feet and listen to the relaxing sound or running water. 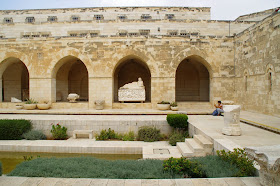 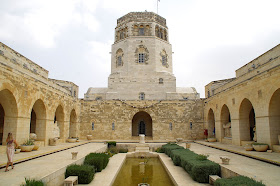 The ceramics at the other end of the courtyard

Don't just rest at the courtyard, walk around and discover the pretty hidden corner covered from top to bottom with blue tiles. 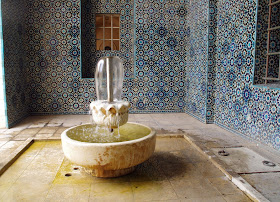 Panels from the Holy Sepulchre church

These panels used to decorate the Holy Sepulchre church but was kept for safe-keeping in the museum after a fire. I guess that they stayed at the museum because they are a bit on the fragile side. The curators did an awesome job identifying the figures and symbols on the panels and explaining them.

There is also a cool small model of this church in the museum.

We tend to think of archaeology in Israel with either a religious or "current-ruler" (Byzantine, Roman, Ottoman sultans etc.) focus. But before all of that, Israel was also a land bridge between Africa, Asia and Europe.

In the museum there are quite a large collection of artifacts of the people who lived here WAY back in time.

Statues and decorations from Hisham's palace

I have never heard of this palace before. Apparently this palace, that is found just outside Jericho, is one of the desert palaces and was built in the 8th century (more or less). 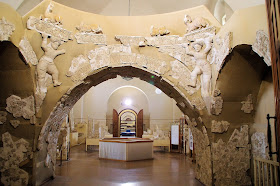 Directions to the Rockefeller Archaeological museum


The Rockefeller Archaeological museum is in East Jerusalem at 27 Sultan Suleiman street,
across the street from the Old City Wall.

Parking is limited but it is easy to reach by bus or tram. I took the tram to Damascus Gate and then walked downhill for about 10 minutes. The hexagonal tower of the museum is quite easy to spot.

And the entrance is free! Be sure though to check the museum's website for opening times.