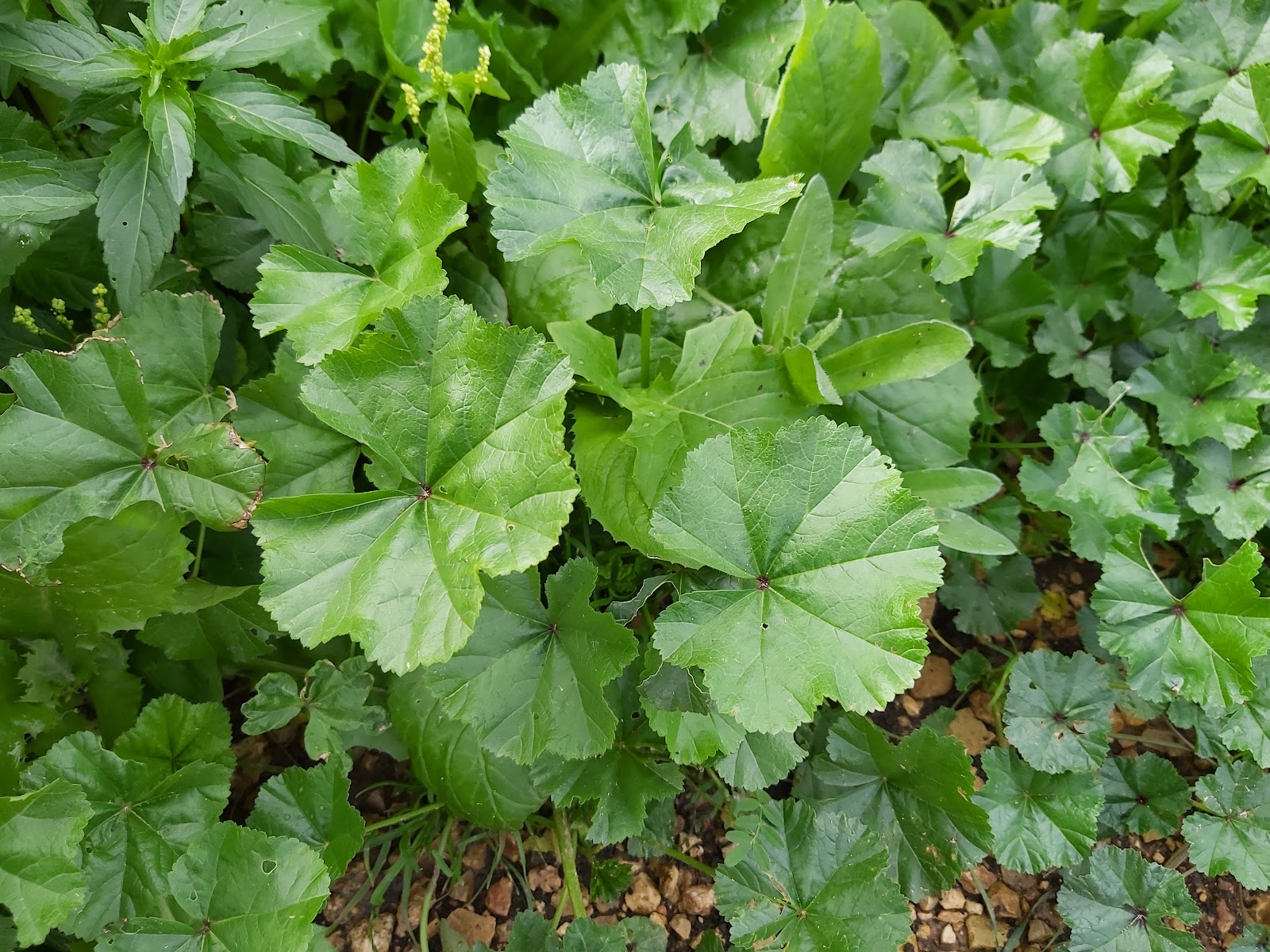 During the winter months in Israel, as soon we had a bit of rain, the fields are covered in  green khubeza plants. 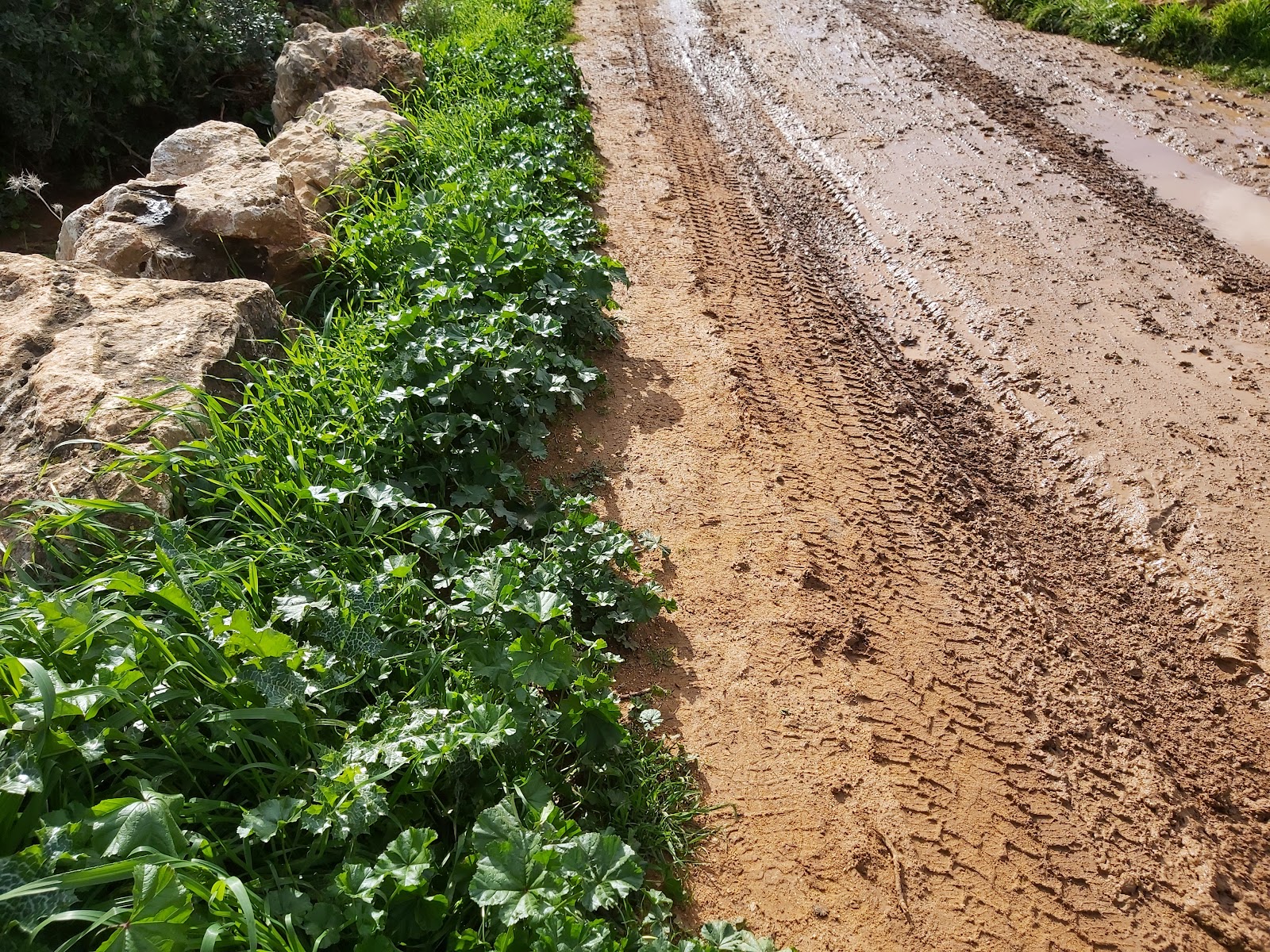 They grow close to the earth and turn the dry Israeli landscape into an unexpected emerald green. Their willingness to grow to easily and luxuriously make them seem nearly weed-like. Khubeza is however the opposite of a weed. It is one of the most well-known edible plants here in Israel. Every self-respecting forager definitely has khubeza on their top-ten list.

Is it mostly known by its Arabic name here in Israel. Khubeza comes from the word "hubz"  which means bread in Arabic. Apparently the plant has edible fruit that looks like a small loaf of bread.

Just like young children are taught that you can suck the sap from honeysuckle flowers and look for pine nuts under pine trees, they learn here in Israel to look for the khubeza plant's 'bread'.

I personally have never seen this. Now that I have learnt about the small bread-like fruit, I will go and look for it. Watch this space for an update!

In Hebrew the khubeza plant is called halamit. If you swop around the l and the h, you get lehem - the Hebrew word for bread.

In English it is called mallow and its Latin name is Malva nicaeensis. The mallow plant is part of the large family of Malvaceae plants. Others include cotton, okra and hibiscus. It was also used as a herbal medicine as an anti-inflammatory agent, a diuretic and a laxative.

The laxative part may have been why Job ( from the Bible) may not have been a serious fan of mallow.😀😀

"Can that which is tasteless be eaten without salt, or is there any taste in the juice of the mallow?"

Getting lost in translation

Just as a side note:

Translators of the Hebrew Bible from yonder year seemed to struggle a bit with finding an English substitute for the word mallow. Just have a look at all the different versions of translations at Bible Hub.

They seemed to have decided that mallow is similar to the tasteless "white of an egg".

I guess you cannot really blame them. How could a bunch of old English gentlemen know just how beautiful and green (and tasty) khubeza looks after a long summer of dry weeds? Khubeza may be a bit tasteless, but it is definitely NOT like egg white.

The "spinach" of a sieged Jerusalem

Job may have turned up his nose at it but there was a time when the presence and abundance of hubeza helped to save lives.

Straight after the approval of the November 1947 UN partition resolution, Arab militias started a siege of Jerusalem. They blocked and ambushed all the roads to Jerusalem. No supplies could reach the 100 000 Jewish citizens living in the city.

Their food supplies dwindled so much that the mayor of Jerusalem started to strictly ration the food. Luckily this happened during the rainy season in Israel and the nearby fields were covered in khubeza.

A lady who knew how to get her hands dirty

The idea to cook with khubeza during the siege belongs to Rachel Yanait Ben-Zvi, the wife of the then President of Israel. She was quite a busy lady and was awarded the Israel Price 1978 for her special contributions to the country and its citizens.

Rachel left Israel (then called Palestine) to study agriculture at the University of Grenoble in Francr in 1911. She returned home and  founded "The Educational Farm" after World War I in Jerusalem. This farm taught agricultural education to women.

I am pretty sure that the nutritious value of the khubeza plant was somewhere on their curriculum!

During the siege of Jerusalem, instructions for cooking with khubeza was broadcasted over the Jerusalem radio station. These broadcasts were heard by listeners in Jordan. Radio Amman in return reported that the "Jews were eating donkey and cattle food - a sign they were dying of starvation and would soon surrender".

They didn't surrender though. The Burma road, a steep makeshift road, were built instead and supplies were sent through at night while hiding from Arab sharpshooters.

Today, after the Six Day War in 1967, Jerusalem is reunited again and there are several highways into Jerusalem. And the khubeza plant, referred to by both Jewish and Arabic citizens by its Arabic name, still grows wildly all over Israel. 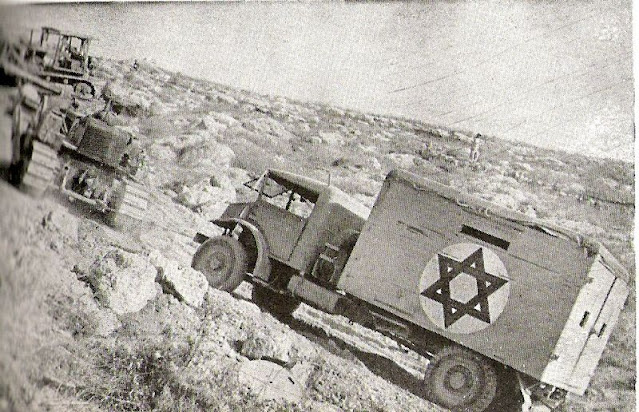 Here are some recipes made with the khubeza plant

Still not convinced that khubeza sounds like a good idea? Here is an article about how this modest plant is making a serious comeback in restaurants here in Israel.

The humble khubeza plant has finally been recognized for its nutritious contribution to the Israeli table. :)