Living in “In spite of it all” street by Marina Shemesh 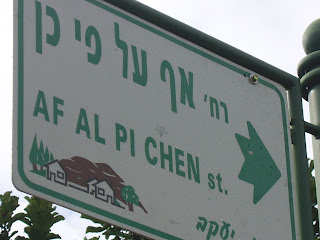 My street name is called Af Al Pi Chen - a bit strange sounding, I agree. Especially when you say it out loud.

What is even more strange, is that Af Al Pi Chen is Hebrew for “In spite of it all”. Sometimes it is translated as "nevertheless", "nonetheless" or "notwithstanding".


Quite an odd name for a street, isn’t it? I keep telling you that the Holy land is an unusual place!

We even have street names that seem to be more suitable for the table of contents of a self-help book. In spite of you being a scaredy cat, extremely ugly or as thin as a spaghetti  stick– you CAN do it, man!
I can even image a sentence in the biography of an rock star saying something like:
Notwithstanding my frequent drug abuse, I still managed to make beautiful music” ….:)

But here, in my little corner of little Israel an entire STREET is called In spite of it all. Israeli can be quite tough, so the street did not get its name to encourage timid house dwellers to get outside into the big bad world.

No, my street is named after a ship.

A ship!
Yeah, I am sure that you did not see that one coming, did you!

The Af Al Pi Chen was one of several ships that the Israelis bought to smuggle Jews out of Nazi Europe to Israel. The British, who were controlling Israel as that time, however did not allow these ships to disembark in Israel.  Some managed to sneak past but often they impounded and the passengers send to detention camps or back to Europe.

Now that I think of it, In spite of it all, is a great name for a street. It sounds cool, people definitely remember it and it is kinda of like, you know,.. encouraging.  Those passengers and crew had everything against them and still they got on that ship and sailed to Israel.

Some of them made it, many did not - but at least they tried. They did SOMETHING, even though the odds were stacked so highly against them.

I feel honored to live in this street that was called after a ship filled with all those courageous people.

The Af Al Pi Chen has been turned into a museum and is parked near the entrance of Haifa. I have not visited it, but now that I know of its history I will definitely go and pay it my respects.