The Glass Museum at Kibbutz Nachsolim

June 27, 2012
Kibbutz Nachsolim is right next to Hof Dor (Dor beach), one of my favorite beaches here in Israel. I usually walk right past the kibbutz, straight into the clear (and wonderfully cool) Mediterranean sea!


But a while ago I had the chance to visit the glass museum on the kibbutz and I was surprised at the amazing treasures housed in there. It is not just about glass - even though glass was the reason the building was originally built.

The museum took its name from an extremely well-equipped and state-of-the-art glass bottle factory that the Baron Rothschild had built in 1891 right next to the beach. The glass factory was to supply bottles to the wineries in Zichron Yaakov using the sand from the nearby beach. The chemist Meir Dizengoff ( later the first major of Tel Aviv's) oversaw the bottle making process.


Not a bad idea one might think - but nobody had bothered to check the sand's suitability to be made into bottles. The glass  factory did make bottles .... but the glass of the bottles was too dark and the 'uppity' wine-makers of Zichron Yaakov refused to buy the bottles.  And on top of everything, many of the factory workers succumbed to malaria, and after five years the glass factory was closed.

The old glass factory was nearly pulled down but then the Dutch marine archeologist Kurt Raveh showed up. He, with the help of volunteers and kibbutznikim rebuild the old glass factory with stone from old Roman ruins. The 'new' building was turned into a museum and house some amazing finds. 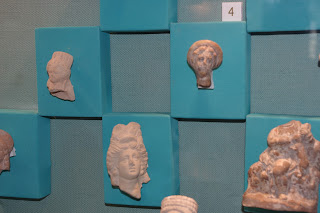 Hof Dor was a harbor in the Bible times and an important trading center. Many artifacts were brought up out of the sea or dug out from the nearby archeology site, Tel Dor. In the museum you can see various relics such as Roman fertility dolls, a Crusader sword, a 1948 pistol from the War of Independence and a large cannon dumped by Napoleon.


This beautiful beach was obviously more than just a place for a nice swim!  The staff at the museum were very well informed and me and my fellow museum goers were following our guide with open mouths. Our children were entertained with a puzzle whose answers they had to hunt for hroughout the museum.

If you ever visit the northern part of Israel - come and visit the glass museum. There is lots to see and you can even go for a dip in Mediterranean afterwards. Who knows...you might even find some treasure at the bottom of the sea! It has happened before.


Here is some more information about the glass museum, the Mizgaga in Hebrew and here is Kurt Naveh's web site.

March 06, 2019
The almond blossoms have a special place in the hearts of Israelis We are right at the entrance of spring now in Israel. Luckily we had a lot of rain this winter and everywhere is clean and green. We are already enjoying the spring flowers but one cannot talk (okay write..☺) about spring flowers without mentioning almond blossoms.
Post a Comment
Read more

March 25, 2012
The wild mustard is growing yellow and everywhere in Israel at the moment. But not the kind of mustard that you eat with ketchup on your hotdog! Wild mustard as in wild mustard plants! :) I am talking about  Sinapsis Arvensis , a tiny yellow flower that grows in masses in fields, along road sides and abandoned building sites. Up close the wild mustard flower does not look like much - a bit on the puny side actually. But just come across a field filled with mustard flowers and you will be enchanted - just as I am every spring.
4 comments
Read more

July 11, 2012
Hummus plays a large role in the Israeli diet. Wherever you may find yourself eating something, from a picnic at the beach, an end-of-year party or a conference in a smart hotel - there you are sure to find a plate of hummus. There are even restaurants in Israel that ONLY serve hummus and no other kind of food. These restaurants, known as a "hummusia" in Hebrew are very popular and Israelis often argue about which hummusia serves the best hummus. Some people like their hummus with cooked fava beans and/ or boiled chickpea kernels, others insist on a boiled egg in their plate (not me!) and others just want a sprinkling of paprika and a dash of  olive oil. Which ever way you like to eat it, hummus is very healthy, very filling and a great vegetarian dish. It is made out mashed chickpeas (garbanzo beans), olive oil and seasoning. A good plate of hummus MUST be accompanied by a few decent pitot (plural for pita bread). One eats the hummus by breaking of a piece of the p
7 comments
Read more