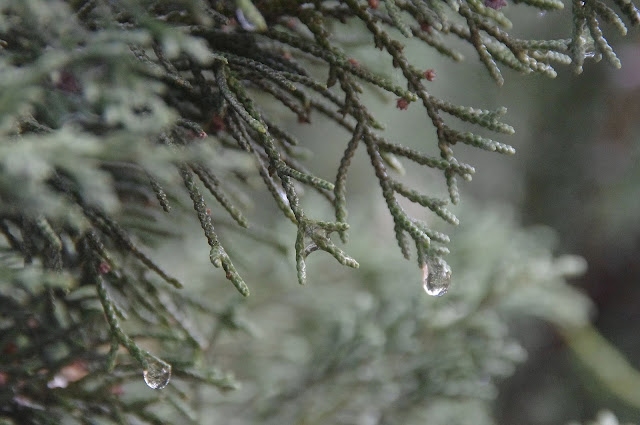 As a South African living in Israel, I cannot help but constantly compare the two countries. Of course there are many differences but one of the major similarities is our dependence on rain water.

Sometimes the rain does not come


In both South Africa and Israel (especially now with climate change) the rainy season often does not come. Or does not come in time or it rains but not enough. Which is quite disastrous because the dams, rivers and aquifers need to be filled up and the bone-dry fields need rain to feed the wildlife and grow the crops that we exist on, etc. etc. Who doesn't know the importance of rain?


Growing up in South Africa, I remember services being held where everyone got together to pray for rain.


Now living in Israel, I learned that religious Jews ask for rain every single day during the rainy season when they pray their three daily prayers.


There is this Jewish "urban legend" that the three fathers were responsible for three times a day prayer. Abraham introduced the morning time to pray, Isaac the afternoon slot and Jacob was the nightowl.


Every Jew had to pray to God everyday, but since the time of Moses the form of the prayer and how many times to pray was your personal choice. Daniel, the guy who spend some time with hungry lions in their cage, prayed three times a day during his time in exile in Babylon.

When a bunch of scribes have a meet-up


After the Jews returned from their 70 years of exile in Babylon, Ezra the Scribe realized that something had to be done to preserve their Jewish identity. They had picked up different languages and customs in Babylon and started to forget Hebrew. So Ezra and a bunch (120) of prophets and other scribes got together in a group called "Men of the Great Assembly". (Think of it as the precursor of one of those academies of languages that records new words and keep an eye on spelling and grammar. But with a religious twist.)


Of course there is NO mention of one single woman in the Great Assembly but we all know how chauvinistic history can be..and...that like totally 100% guaranteed these 120 men took uncredited advice from their wives and daughters. Okay rant over, let's get back to the rain.


One of the tasks of this group was to finally decide what should be in the daily prayers. The prayer that they eventually finalized is called the  "Shemone Esrei" (the "Eighteen Benedictions"). And its nickname is "the Amida" (the standing) because it is recited while standing and facing Jerusalem.


You can read the text of the prayer here. Everyday, all over the world religious Jews (and also not very religious) recite this prayer three times a day. I have even seen people praying the Amida on my morning train commute.


Different bits are added to the prayer during the different Jewish holidays and there is also a summer and winter version. These versions differ in the way that rain is asked or not asked for.

Getting into winter mode


The winter mode prayer starts two weeks after the Sukkot holidays. Sukkot is a pilgrimage holiday and in the days of the temple, Jews would travel to Jerusalem during this holiday to bring sacrifices and pray. They would travel from far and wide to Jerusalem, even from Babylon


Even though the exiled Jews of Babylon were allowed to return to Israel after 70 years, a large population stayed behind. But they still traveled to the temple in Jerusalem for the holidays if they could.


These pilgrims were allowed two weeks to make their way back home. After that, they'd better have packed umbrellas because everyone has started with the rain prayer.

So when does the summer mode starts?


The summer mode of the Amida prayer start on the first day of Passover. This is when everyone stops praying for rain and ask for dew instead. Passover always falls in the spring time and is the period in the year when one doesn't want too much rain to ruin the planted crops.


If these prayers seem to totally follow the agricultural seasons, you are 100% correct. People have lived here in Israel for ages and wheat crops were their main source of food. Don't forget that Israel is smack in the middle of the fertile crescent. It makes sense that the prayers for rain and not-rain would follow the plant seasons.

So what about the water from the sea?


I read a blogpost recently where the writer asked if it is still relevant to pray for rain. After years of uber-dryness, the Israeli scientists have finally figured out how to make desalination plants effective. Most of the water in our taps came from the sea.


Personally I think that it is still VERY relevant to pray for rain. We, the crops and municipal gardens may get their water from taps but what about the wildlife and the fields?


Israel don't really have many rivers but we do have the Jordan river that ends in the Dead Sea, which is getting smaller every year. More rain to fill up the Sea of Galilee, our few rivers and the Dead Sea would be very welcome. And how would the wild flowers grow if there were no rainy season?


So yeah, science may have kept the taps running but our souls and the land still thirst for rain.


May God make the wind to blow and the rain to fall.