It is not an exaggeration to say that Israelis are hot-tempered and love to argue. It is sort of a national sport here.

It is actually surprising that in such a small country, so many people find so much to argue about. Apart from the usual suspects such as politics, religion and parking spots, the people of Israel can argue about trivialities such as the shaded places at the beach, talking on the phone in the quiet train carriage and standing in a supermarket queue.

There is however one thing in Israel that EVERY single person agrees about.

Their love of eating cool watermelon in the hot Israeli summers.

It doesn't matter if it is an Arab, Jew or Christian. Religious child or secular great-grandfather. Everyone passionately loves eating watermelon here in Israel.

Most of us eat watermelons at home but it is also a firm favorite at picnics, parties and even restaurants. Be aware though that watermelon in a restaurant can be really expensive.

The ultimate, most favourite place to eat watermelon is definitely the beach. There is no better way to cool off than eating sweet and ice-cold slices of watermelon. Especially if you accidently swallowed a mouthful of seawater.


Be wary of the first watermelons of the season

The watermelon season starts early in Israel because most of them are grown in greenhouses in the Arava. The Arava is the desert area south of the Dead Sea.

Watermelons are however seasonal fruits, so be wary of watermelons that you see in the supermarket in May. They are usually tasteless. It is better to only buy a watermelon smack in the middle of the summer, when the weather is hot.


Where to buy a watermelon

Note that the advertised price is per kilo. Your watermelon will get weighed at checkout and only then you will know what the real price is.

If you are lucky, a farmer or seller will drive around in your neighbourhood with a truck full of watermelons. Similar to an ice cream truck but instead of a crass jingle, you will hear the seller yell "Avatichim! Avatichim!!"

Their prices are slightly cheaper and you also do not have to schlepp a heavy watermelon all the way from a supermarket.

Side funny watermelon story:
A friend once gave me a lift home just as she has finished her weekly grocery shopping. I had to sit on one of the backseats because a big watermelon already sat in the seat next to her.

This watermelon kept triggering the seatbelt alarm. Eventually my friend had to stop the car to buckle the watermelon properly into its seat!


How to choose the perfect watermelon

There is an art to choosing the perfect watermelon. Even if you only buy watermelon in the middle of summer, you may still luck out and buy a tasteless and/or spongy watermelon.

You can force yourself to eat this watermelon but life is too short for that. It is better to just to unceremoniously chuck the entire  thing into the garbage bin and hope for better luck next time.

The best way to choose a whole watermelon is by sound. Grab the watermelon in your arms and then gently slap it. Sometimes people knock on the watermelon but I think the slap is the best. If you hear a hollow sound, you know that this is a good watermelon.

My husband is an expert watermelon slapper and we rarely buy a bad watermelon.

Ages ago, before we got married, he helped me do the shopping for the kindergarten where I worked. The staff was pleasantly surprised that he never chose a dud watermelon for us.


How to cut a watermelon

The watermelons in Israel are round and they can be a bit tricky to cut open.

I was amused to see how the lead character in the beautiful Israeli movie "The Band's Visit" attacked the poor watermelon with a big knife.

One does need a big strong knife but it does not have to be so intense to cut open a watermelon. 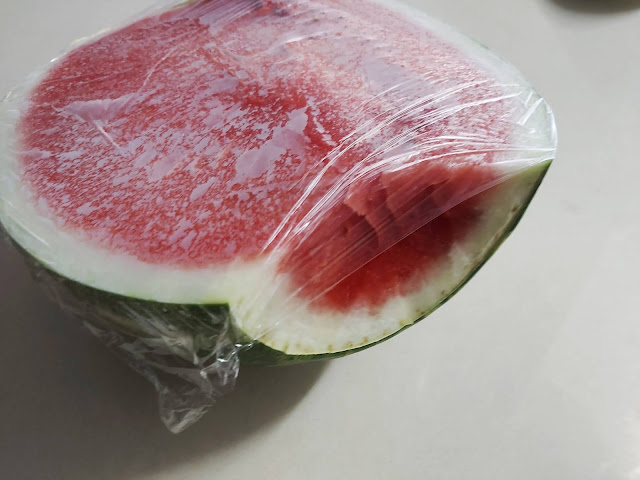 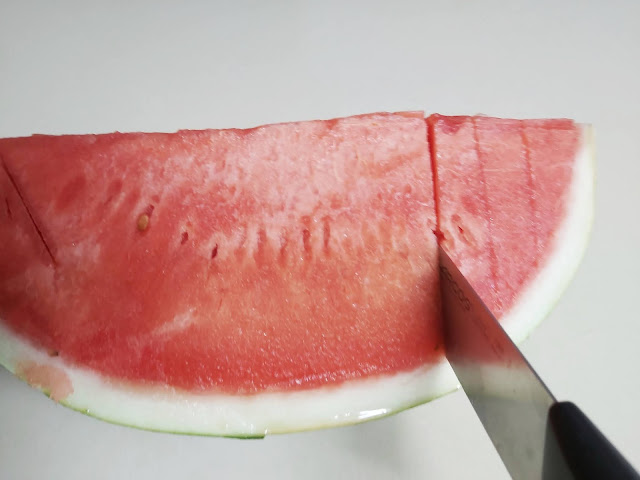 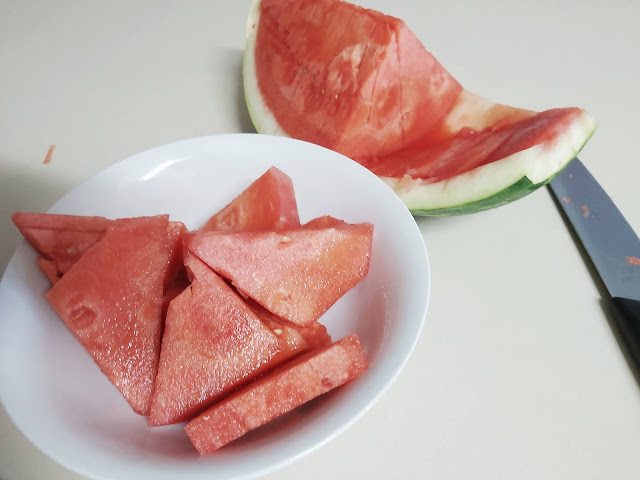 Serve with forks when you have polite company or just with a tea towel for your family to occasionally wipe their fingers from the watermelon juice. 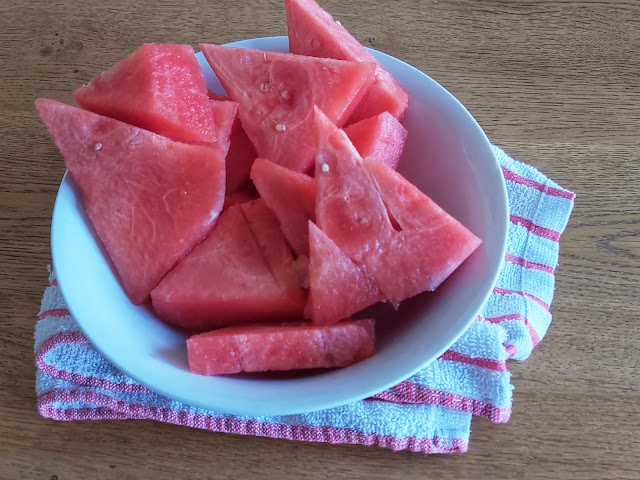 Sweet watermelon pairs beautifully with a salty hard white cheese such as Feta or Bulgarian cheese.

Don't be surprised if you are ever served this strange combination in Israel. Just try it. It is amazingly delicious!

The best way to experience a country is by eating its local foods. Eating ice cold watermelon on a hot summer day is probably one of the most tastiest Israeli experiences one can have.


If you'd like to receive my occasional "Letter from Israel" in your email box, how about signing up at the box in the top-right corner. I am a fierce hater of spam myself and I promise that I only send out these emails VERY occasionally - though I really should be a bit less lazy.

July 11, 2012
Hummus plays a large role in the Israeli diet. Wherever you may find yourself eating something, from a picnic at the beach, an end-of-year party or a conference in a smart hotel - there you are sure to find a plate of hummus.

There are even restaurants in Israel that ONLY serve hummus and no other kind of food. These restaurants, known as a "hummusia" in Hebrew are very popular and Israelis often argue about which hummusia serves the best hummus. Some people like their hummus with cooked fava beans and/ or boiled chickpea kernels, others insist on a boiled egg in their plate (not me!) and others just want a sprinkling of paprika and a dash of  olive oil.

Which ever way you like to eat it, hummus is very healthy, very filling and a great vegetarian dish. It is made out mashed chickpeas (garbanzo beans), olive oil and seasoning.

A good plate of hummus MUST be accompanied by a few decent pitot (plural for pita bread). One eats the hummus by breaking of a piece of the pita brea…
7 comments
Read more