Sea squill - the Israeli wildflower that blooms at summer's end 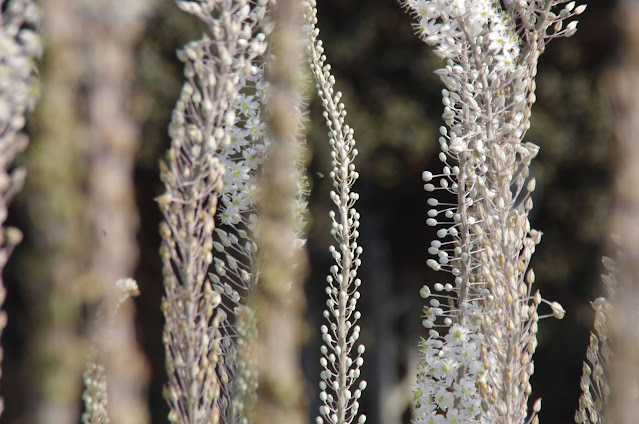 The days are still hot in Israel. Very hot. We barely survive from one heatwave to the next and the air conditioning units hum in the background 24/7. The only time we dare to go walk or run is either early in the mornings or in the evenings, long after the sun has set.

Not that there is much to see outside - the land is scorched and dry. Only the long dead weeds are still visible in the fields but they themselves are also slowly crumbling into dust. The only bit of greenery is from the long-suffering olive trees covered in a year’s dust.

What are those long stalks covered with little flowers? It is the hatzav!

The hatsav, Urginea Maritima, known in English as the sea squill, is a unique Israeli wildflower. It is unusual and different in many ways. 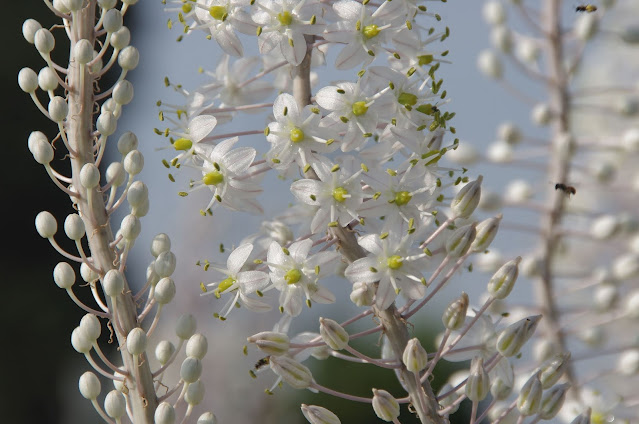 The special features of the sea squill

The sea squill's blooming period is at the end of the summer and not in the spring time like all the other wildflowers. The 'end of summer' does not mean that the days are suddenly so much cooler and that the winter rains have started. The weather is still very warm this time of the year. I suspect that the sea squill knows that it is time to flower because the sun is setting earlier and the days are getting shorter.

The plant consists of a long stalk that can grow up to two meters. This length helps the flower to spread its seeds as far as possible.

Small white flowers grow directly from the stem. They bloom from the bottom up. Everyday another 30 flowers open up above from the previous day's batch. 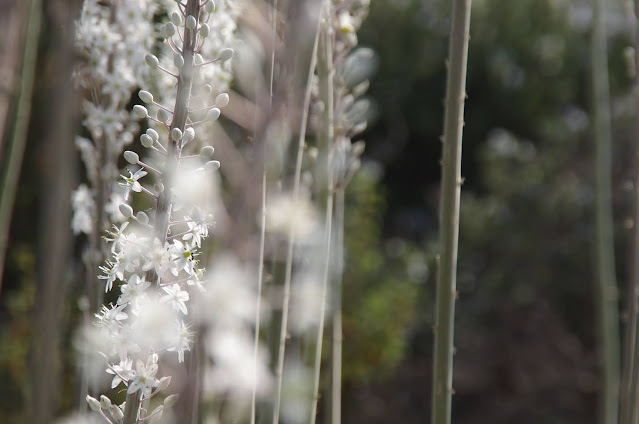 The flowers are open during the night and day and do not have a specific pollinator. Bees, moths, wasps and flies all enjoy the sea squill's nectar, though the last two are not really pollinators. They enjoy the nectar but don’t spread the pollen. All the other wildflowers are long gone, so it is a good thing that these flowers are blooming this time of year to feed the insects.

The sea squill have leaves but they appear in the spring. The fact that the plant produces leaves in the spring and flowers in the fall is a way to survive the Mediterranean climate because the summers here are so hot and dry. 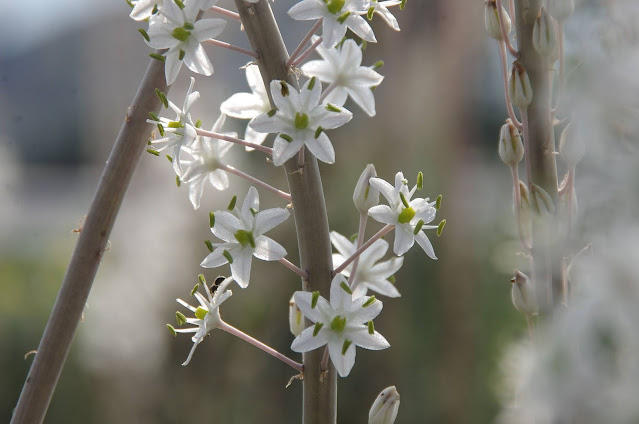 The sea squill grows from huge bulbs that lie just underneath the earth's surface. These bulbs can grow up to 25 cm in diameter (10 inches) and weigh up to 1 kgs. It makes sense that the bulbs need to be so large to support the tall stalks covered in many small flowers. These bulbs are filled with nutrients which explains how the plant can bloom at the end of the summer when the earth is all dried out.

The sea squill is one of the rare poisonous plants in Israel and one should not touch the bulbs without wearing gloves. The poison discourages animals such as deer and wild pigs to snack on the leaves and the nutrient-filled bulbs. 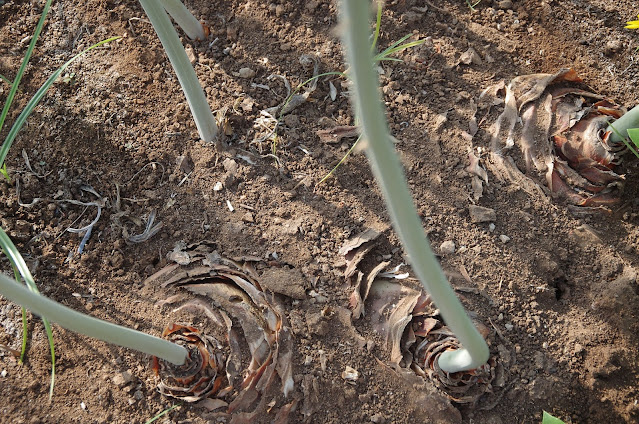 The natural habitat of the sea squill

The sea squill seems such an Israeli plant but it actually grows all over the Mediterranean basin. It’s biological name Urginea Maritima reflects this. “Urginea” refers to an Arabian tribe in Algeria, known as Ben Urgin. “Maritima” means ‘growing by the sea’.

Here in Israel, the sea squill does not only grow next to the coast but Israel is a skinny country and actually anywhere in Israel is near the coast. 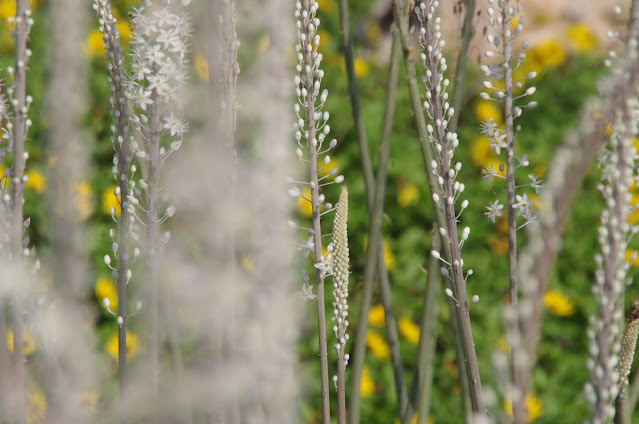 The sea squill in ancient times

The Egyptians referred to the sea squill as "Ein Sit", the god who resists the sun, because it only blooms in the autumn.

The Romans and Greeks used the sea squill in their medicine, especially as a heart medicine. Pythagoras (c.582-c.507 BC) created a cough medicine with it and apparently liked the medicinal properties of the sea squill so much that he wrote an entire volume about them.

Pliny the Elder (23-79 CE) wrote about the various types of sea squill and how to prepare the medicine known as squill wine (uinum scilliticum). 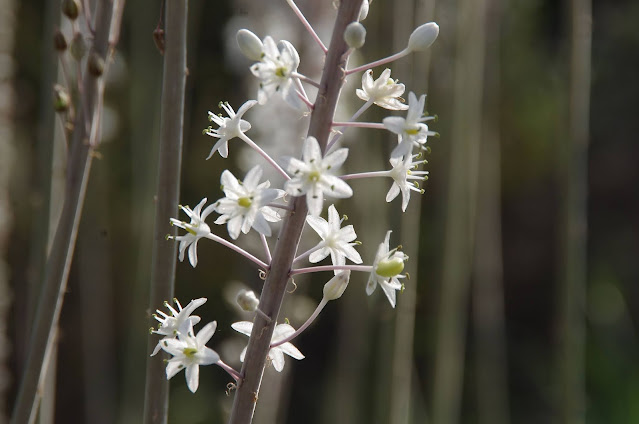 The plant is said to be found at Arab cemeteries because they are thought of as messengers and are known as basl el maytin (bulb of the dead) or as  "messengers of the praying to the dead".

The Bedouin use the bulb of the plant to make rat poison and they believe that an abundance of sea squill flowers indicates a raining winter.

The Jewish sages mentioned that Joshua used the sea squill to mark the boundaries of the tribes’ land in Israel. The leaves and flowers appear when it is time to plough the fields. The plant’s toxicity can also deter people from digging up the bulbs to move the boundaries. 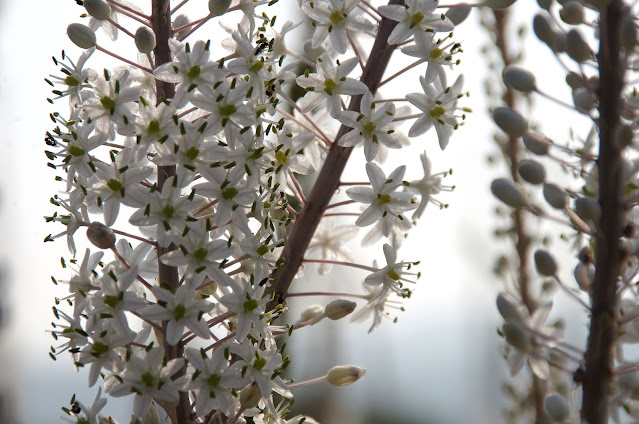 A plant with a song

Kindergarten children are taught to look out for  it and the plant even has its own song. It was written by Naomi Shemer, one of Israel’s leading songwriters.

I have translated the first verse:

In a drip-drip song

The smell of the rain

Long live the hatzav! May it stand straight and prosper even longer that it has! 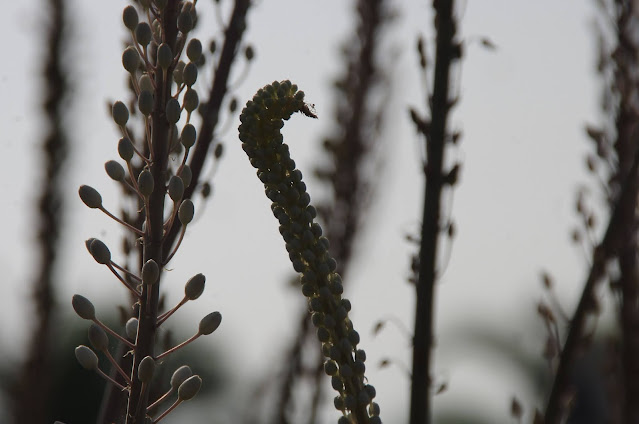