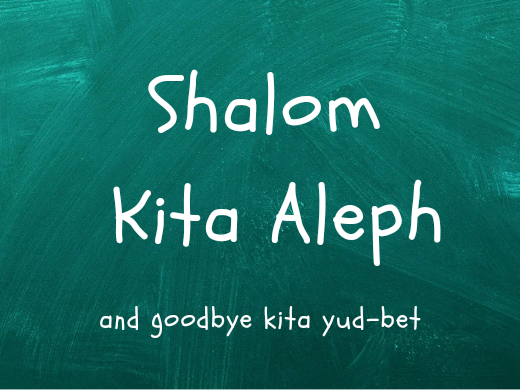 This morning as I walked past the high school next to our apartment, it was obvious that my 10-minute zen walk was ruined.

For two gorgeous months I had the neighbourhood to myself. Strolling all by myself to work, thinking about nothing. It was just too late in the morning for the joggers and dog walkers but still early enough not to arrive too sweaty at the office.

Then one Thursday morning my peaceful commute changed dramatically. I had to fight my way upstream between swarms of children getting dropped off or making their way to school by foot, bicycle or scooter.

It was only when I noticed that the children were all wearing white shirts that I realized it was September the 1st. The date that Israeli school children return, usually*, back to school.

This day is marked with ceremonies and welcome parties.  As custom dictates in Israel, the usual dress for holidays and ceremonies is something white.

For the first time in about 18 years, I don't have a child in the Israeli school system. I didn't have to buy school supplies, pick up a heavy bag filled with a year's worth of school books or stock up on bread and sandwich makings. Nor did I have to wrangle a school schedule from a reluctant teenager to plan my own week accordingly.

There were no annoying Whatsapp messages from idiot parents wishing us all 'good luck' with the new school year. No messages from new teachers introducing themselves and already asking for volunteers. No mail from the school's secretaries about school fees and to please pay it as soon as possible.

There was just absolute radio silence from the Israel's education department's side.

It was only on that beautiful sunny Thursday morning, walking into those groups of young and mostly grumpy school children, that I finally realized I've reached the end of a long road.

The school system and I have finally parted ways.

After 18 long years, I count the three kindergarten years too, I'm no longer part of that large group called 'parents with school children'.

I've actually been half looking forward to reaching this stage. How wonderful not to have to go to those parents teachers meetings anymore. The teachers usually give useful information at these meetings. They are teachers after all and know how to manage a classroom.

But there will always be a parent or two telling the rest of us about their wonderful child. I always told my own children afterwards to stay away from these 'wonderful' children. It sounded as though the parents were trying to sell us something.

Other parents would prepare a long list of complaints regarding their own child's education and then insist on getting an 'explanation' from the teacher during the meeting.

To any current or future parent reading these words, if it doesn't concern the entire class, please don't bring it up during the PTA meeting. None of us wants to hear about your child's school problems.

There are many things about having children in school that I won't miss. Worrying about them on their school trips, the type of friends they are making and if they've studied enough for a school test.

And there is always that mean girl, right? Is there some unbreakable law in the universe that states all schools should  have bullies or mean girls to make school difficult for our children?

The school years were not all bad though. As a new immigrant to Israel, I learnt a lot about the country together with my children. Helping them with their homework was not only  an opportunity to learn something new, but also see a different perspective towards the world.

Growing up in South Africa, we're taught about the Great Rift Valley that is slowly separating East Africa from the continent. Here in Israel, the school children learn about the Syro-African rift that includes the Middle-Eastern part of the rift. I never realized that the Great Rift continued beyond the African continent.

My Hebrew also improved a lot because of the Israeli education system. You have to help your children with homework and also understand all those neverending emails and messages.

One of the things that I could never get into my head was how the Hebrew numbering system works. The ancient Hebrews didn't have numerals like 1, 2, 3. They just used the Hebrew alphabet. So

(I'll write more about this in another blog post, so look out for that.)

In Israel they use the Hebrew numerals for the school years. So the first grade is called 'kita aleph'  and the 12th grade is 'kita yud-bet'.

Not remembering how Hebrew numerals work was/is a constant source of irritation for my children. I never know in which Hebrew year we are living and also not in which Hebrew grade my children were in. If anyone asked me, I would just mention my children's ages and let them do the Hebrew conversion for themselves.

And now all of that is behind me.

Life has moved on and my only contact with school children is sharing the pavement with them. I see their beautiful young faces in the mornings and realize two things:

*The teachers union in Israel often chooses the start of the school year to strike. Parents have to keep an eye on the morning news to see if they can send their children back to school already.