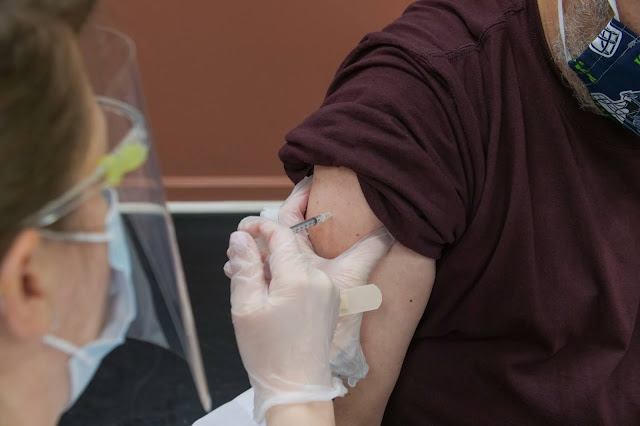 Yesterday (9 January 2020) Bibi, the prime minister of Israel and our health minister got their second vaccine against the coronavirus. Once again the event was broadcasted live on television.

They got their first vaccination three weeks ago. The idea was to show everyone that the vaccine is safe and people shouldn't be scared to take it. One can however not say that the Israelis were all that worried about taking the vaccine in the first place. It was more like a frenzy to go and get vaccinated and then tell everyone that you got it.

I noticed only one anti-vaxxer, originally from the USA, going on about how unsafe and untested it is and the government is just trying to placate us. Others, including me, were a bit hesitant for maybe two seconds but quickly got swept up in Operation "Let's jab everyone".

For two weeks we heard and saw all the over 60 year olds and health-workers getting shots. They would book an appointment at their local HMOs just like booking an appointment with a doctor. HMO stands for health maintenance organizations but let's call them our health clinics. There are large four health organizations in Israel and they all have numerous clinics spread throughout the country in our towns, cities and Arab villages.

Then we heard that hospitals are vaccinating everyone showing up, even those under 60. Stories started to circulate of our health clinics putting out calls at the end of the day that there are left-over shots and that anyone can come to get vaccinated. Once a package has been opened, it has to be used because no-one wants to throw any shots away. People under 60 started to show up at health clinics at the end of the day just on the off-chance that there might be an extra vaccine for them.

Media event in an Arab city

This 66 year-old turned out to be a bit of an ex-con. Some media outlets labeled him a murderer and asked how Bibi's security personnel allowed such a person to get so close to our prime minister. The whole 'go and get vaccinated' drive turned out into a bit of a media circus around the vaccinator's criminal background because the reporters got their facts so wrong.

In the end it was the ex-con who turned out to be the most reasonable about the entire affair. He said, and I am totally paraphrasing here, that the media just looked for a reason to downplay Bibi's due credit. In the end everything turns political here in Israel.

Even I got a turn

My clinic said that people younger than 60 can come for their vaccines since the clinics in the Arab towns and villages were not that busy. So my husband booked our appointments and we got our vaccines. Yeah finally!

We got our shots around 4pm in the afternoon. The competent nurse who administered the shot, a Druze lady, told me that she has been vaccinating people since 8 am that morning. She just wanted to finish with the last opened package and go home to her children already.

Her words made me realize that there are hard-working people behind Israel's amazing vaccination percentages. The Israeli government had to negotiate with Pfizer and Moderna and figure out the logistics on how to vaccinate as many people as soon as possible. In the end though it is thousands of people who made our vaccine drive as successfully as it did.

The pilots who brought the vaccine to Israel. The people who figure out the cold storage and distribution issues. The clinic managers and medical admin who make the appointments and keep an eye on the opened vaccine packages. The nurses who give the shots and watch their patients for any side-effects. Even the people who started the Whatsupp groups that let others know which clinics still have left-over vaccine shots.

Now THIS is teamwork isn't it? I told you that Israelis are good in a crisis. When they have something that they can do, they go 110% full steam ahead.

Why are the Israelis so anxious to get vaccinated?

Here in Israel we seem much more pro-vaccine than other countries. Some say that we have a strong case of FOMO (fear of missing out). If one person gets someone we all think that we are also entitled to it.

Others say that this is just an example that people are the ultimate herd animals. If a few start running into a direction, we will all start running. Many of the Arabs who were hesitant at first also went to get vaccinated when they saw all the people coming to the clinics in their towns.

It could also be that people trust and feel comfortable with their health providers. Basic health care is free here in Israel and people make use of it. The people in the local clinics know their patients well and have a life-long relationship with them.

There is this joke about an old man who goes every morning to the clinic to complain about his aches and pains. One morning he didn't show up, so the staff got worried.  Eventually they phoned his wife and asked: " Why didn't Yossi come to the clinic today? Is he sick?

Yes, we are tired of wearing masks and social distancing and going into lockdown every two minutes. We are also worried about our loved ones and despair everyday at the climbing numbers. The economy concerns us and we know of too many people who do not have an income at the moment.

There is however one big inclusive reason why we would love to get vaccinated already.

We all want our 'green passport'.

It is actually a piece of yellow cardboard that states that you have received your two Covid-19 vaccine shots. Bibi and our health minister received theirs live on television and we want ours too!

This will, hopefully, allow us to fly without getting tested. We live in a small country and we all have 'cabin fever.'

We can only act and hope for the best.